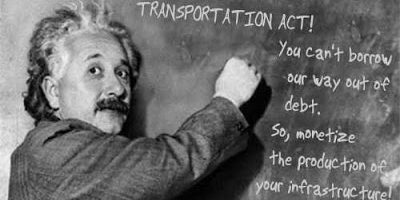 You Don’t Have To Be An Einstein To Understand That

The Big Solutions involving money Are Often Quite Simple. Over $104 Trillion in debt and unfunded obligations, plus interest! And growing! (2008)
There is no way to pay our collective debt by using the formula of:
borrow+bond+tax+bailout = bankruptcy for the American people.
With a simple change in the law, we will be able to fund an infrastructure rebuild, create hundreds of thousands of jobs, drastically reduce taxes, balance budgets, while paying down our debt.
Listen to all of the “experts”. They will say that they don’t know how much this latest bailout will cost, they don’t know if it’s going to work, they don’t know if this is the “bottom”. They. Don’t. Know. That’s because they don’t know what’s wrong.
Here’s what’s wrong: We only use debt for money. We borrow our money into existence. No debt, no money.
Here’s how to fix it: Stop. Stop using only debt for money. Begin funding the infrastructure rebuild with debt free money.
That’s it.
A BIG idea.
That’s simple.