Thinking outside the monetary reform box 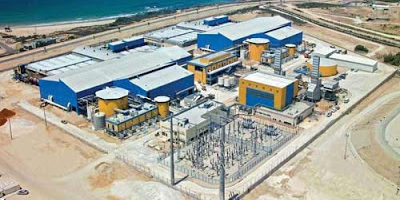 So, You Think Outside The Box, Do You? This is a picture of one of the worlds best water desalination plants. It is capable of producing between 100 million and 400 million cubic meters of clean drinking water per year.
With the successful passage of The MINNESOTA TRANSPORTATION ACT (MTA), Minnesota will will soon have the most modern transportation infrastructure in the world – debt free. It will also have the most stable banking system, one of the lowest costs of living, the lowest unemployment rate, highest rate of people moving from welfare to work, highest savings rate, lowest gas prices, lowest tax rates, a dominating education and technology sector and some of the most forward thinking leadership in all of the world.
Soon after (I give it 48 hours before the first phone calls start coming in) the passage of the MTA, other states will want to repeat the successful law change allowing them to fix the glitch in their own infrastructure financing. They will repair their own roads and bridges. While Minnesota has 46 bridges that are structurally deficient or functionally obsolete and in need of immediate repair or replacement, Texas has 169 and California has nearly 1,000.
Alongside the roads and bridges that the state will pay for, outright, with newly created, debt free money, other infrastructure will be directly funded as well.
One of the most important projects to move forward on is water. Obviously, essential to all US Citizens. We need a network of desalination plants that can meet the needs of the US population andmeet its agricultural needs. It makes great sense to have a back-up for dry times. Not too long ago, there was such a severe drought in Georgia that people were talking about evacuating Atlanta! No back-up is a very bad plan; especially when it comes to essentials like water.
Build them.
Build them so that they can be upgraded as new technology comes online and fund them – debt free – with the same principals detailed in the MTA. Pay the contractors, engineers, designers, inspectors, truck drivers, safety personnel, heavy equipment manufacturers (if you want heavy equipment that runs on hydrogen technology – fund the research!), uniform and equipment suppliers – they will spend that money into the economy and everyone will benefit, twice – first because new money will flow in and second because we get the desalination plants.
1. Build the desalination plants – some could be offshore.
2. Build a water pipeline from the Southern California coast up through the desert, through Nevada, Arizona, Utah, down to New Mexico and across to Texas and Oklahoma .
3. Build a new freight rail and passenger rail system to several times the safety standards that exist now. Build the most high-tech, mag-lev, solar powered, hybrid, bullet-train system our scientists and engineers can devise.
4. Transform the old rail system into a waste management system and transport all agricultural, rural and urban, non-sewage, non-medical,compostable materials, not used by the localities, out to the desert.
5. Build composting, rotating-drum, rail cars to haul the compost and spray the waste with an eco-friendly enzyme so that the material is ready to till into the sand soon after it arrives.
6. Design and manufacture HHO powered mega tillers to till the compost into the sand – it won’t be long before you will have a mix of sand and loam that will grow some of the best high-heat tolerant crops in the world.
7. Irrigate with the water pipeline.
8. Now export this technology to other areas of the world so that they can provide the food and the jobs for their people.
Food shortage?
Water shortage?
Unemployment?
The Minnesota Transportation Act is a multi trillion dollar, world wide solution.
Box? Bah!