Truth about Velocity of Money theory 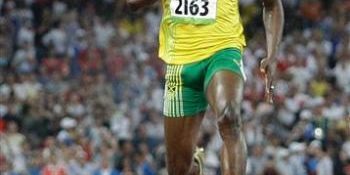 The truth about Velocity of Money Theory. Usain Bolt is the fastest man on the planet. Running half sideways and with his shoe untied!

How fast does he need to run around the track, before he becomes two of himself?

Economists are fond of the idea that if we take loans out fast enough, as the money circulates, there will be enough available for everyone to get a hold of and pay their debts – plus the interest that is owed, but was never created. In other words, if your loan principal changes hands fast enough, it becomes loan principal + interest. They call this concept “velocity”.

Money can never go from hand to hand fast enough to become more money. That’s like saying a man can run so fast that he becomes two men.

Recent events demonstrate what happens if the loans aren’t made fast enough. Words like “credit freeze”, “credit crunch” and “credit crisis” are tossed around – and so are trillions of dollars (1 trillion seconds is more than 31,000 years – this year alone, we’ve borrowed more than $5 trillion. Can we borrow to pay that off too?), to try and plug the obvious holes in the system that the theory of “velocity” can’t describe or predict.

Velocity is an interesting theory, but in reality – in the world beyond theory – velocity is not a real answer. It merely covers up the fact that we have no permanent money system, the interest due on loans is never created and there is always more debt than money. Always.