How Did We Americans Collectively Get More Than $75+ Trillion in Debt?

In search for the answer to that question, letters were written to the U.S. Treasury and others. The answer received from Russell L. Munk, assistant general counsel for the U.S. Treasury was: “The actual creation of money always involves the extension of credit by private commercial banks.” This means interest-bearing loans.

My next question was, if all money is created as interest-bearing loan principal, how is the money created to pay the interest on the principal? The answer received from Mr. Munk was, “The money to pay interest on loans comes from the same source as all other money.” In other words, it is simply other loan principal created and borrowed from a commercial bank.

John M. Yetter, writing for the U.S. Treasury stated: “The money that one borrower uses to pay interest on a loan has been created somewhere else in the economy by another loan.”

John B. Henderson, Senior Specialist in Price Economics, Congressional Research Service, The Library of Congress stated: “Money is created when loans are issued and debts incurred. Money is extinguished when loans are repaid.”

Robert H. Hemphill, credit manager Federal Reserve Bank of Atlanta stated, “If all bank loans were paid, no one would have a bank deposit and there would not be a dollar of coin or currency in circulation.”

My next question was, “Just what kind of credit do banks extend to us?”  I found the answer to that question in the 3rd Edition of the    Federal Reserve System Purposes and Functions, page 6. “All bank       deposits are a form of credit. Basically, they represent amounts owed by banks to depositors.  They come into existence by an exchange of bank promises to pay customers for the various assets which banks acquire: currency, promissory notes of business, consumers and other customers, mortgages on real estates and government and other securities.” 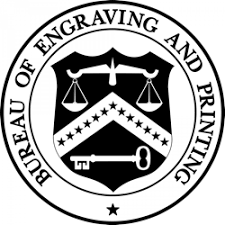 The Bureau of Engraving and Printing produces America’s paper currency and sells it to the Federal Reserve System for between 7 and 19 cents per note depending on the denomination. Linda W. Coleman, Dept. of the Treasury stated, “The Bureau of Engraving and Printing is not authorized to print or issue United States paper currency for direct delivery to the public.”  How do we get them? Coleman went on to say, “Currency notes are placed into circulation by your local financial organizations and can only be obtained from that source.”

“FR Notes are a liability of the issuing Federal Reserve Bank and an obligation of the US Government.” Source: Personal letter to Byron Dale from M.M. Schneider, Acting Executive Assistant, Bureau of Engraving and Printing. “When individuals or businesses want currency or coins to spend, they write a check, exchanging one form of money (checkbook money) for another (cash) both checkbook money and FR Notes are a liability of a bank.” Department of the Treasury Office of the Public Correspondence Fact Sheet OPC-5.

The Bureau of the Mint produces the coins we use then sells the coins to the banks at a profit to the government. However, to get the coins, we must first borrow checkbook money (numbers) from the banks and then buy the coins from the banks with the borrowed money just like we do the FR Notes. Therefore, someone has to be in debt before the notes or coins can get into circulation. Land of the Free.

That is why Mr. Munk was right when he said all money is created when a commercial bank makes a loan.

When someone exchanges the checkbook money for the currency, the liability of a commercial bank is shifted to a Federal Reserve Bank.

Checkbook money is removed from circulation.

The net effect is the banking system creates and lends a ‘promise to pay’ to the government and to the people and receives unto themselves, as a profit- the real physical wealth produced by the people.

The government then uses its power to tax the people to guarantee the bank’s promise to pay. The government receives nothing except what it first takes from the people. So, the government’s guarantee of the       currency is based upon a mortgage on all homes and other property of the people. This fact is well articulated in the Congressional Record March 9, 1933, H.R. 1491, pg. 83 speaking about the Federal Reserve Act. “Under the new law, the money is issued to the banks in return for government obligations, bills of exchange, drafts, notes, trade acceptances and bankers’ acceptances. The money will be worth 100 cents on the dollar because it is backed by the credit of the nation. It will represent a mortgage on all homes and other property of all the people in the nation.” This is what is meant by the statement; the money is backed by the full faith and credit of the U.S. Government.

We must borrow the bank’s ‘promise to pay’ and pay interest on it to have a medium-of-exchange. The banks owe, the government owes and the people owe, nothing was loaned. Yet, the banks and the government can go into court and force the people to give up all the real physical property to pay the ‘loans’.

The debt to the banking system is one of deception, a trick played on the minds of the people that steals their Freedom and places them in economic Involuntary Servitude. The long term effect is that the people who actually produce all the wealth lose their right to gain the full benefit of their production. The men running the banking system including our Treasury and the corporations that grow up around it gain control over everything and everybody including the American Congress.

Money is involved in almost everything we do on a daily basis. Nothing is more critical or important to our economic welfare and standard of living than understanding the workings of the current debt money system and then fixing it. No major problems will be resolved in our states or Nation until we fix our current debt-based money system.

All we hear and read about are the problems our current banking system creates: budget deficits, unpayable loans and foreclosures with no real solutions in sight just more tax and spend or better said, borrow, spend and tax or no tax increases and cut government programs with no plan to create income through jobs in the private sector. What it really takes to create more jobs is more money. The American Transportation Act provides a real solution to all these problems. The ATA provides for our Treasury to create money debt and interest free to fund the production and maintenance of public Roads & Bridges  as an earned payment in lieu of debt or taxes. There is no reason for a Free America to be in economic debt servitude for its people to have a medium of exchange so that they may produce, buy and sell. 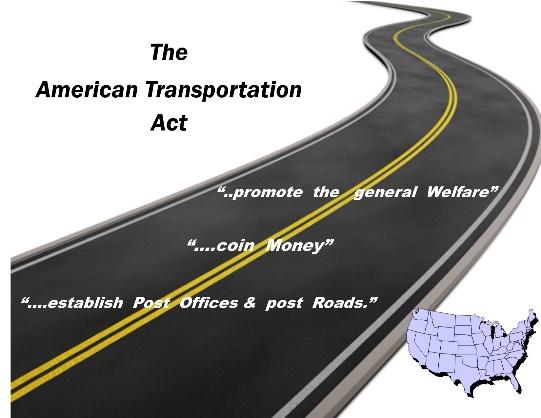 Nothing is more critical to every American’s economic welfare than understanding the current money creation process and its long term consequences.

Contact your Congress people and Senators, governor, mayor, council members, talk show hosts and other leaders. Urge them to understand and support this important legislation. A copy of the American Transportation Act may be read and printed at: www.DebtFreeMoney.org

Failure to change our money from an evidence of debt back to an evidence of debt-free wealth will result in our continued debt servitude and the interest debt becoming greater than the income of everyone. The total public and private debt is near $75 Trillion as of 2020. The total money supply which is all a debt, is near $14 Trillion. America was about Freedom.